You are using an out of date browser. It may not display this or other websites correctly.
You should upgrade or use an alternative browser.
L 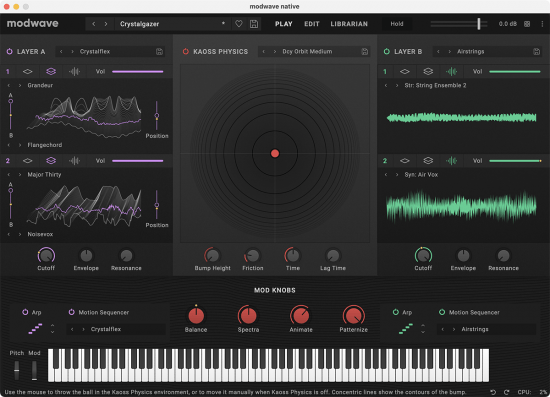 What's a wavetable?
Wavetables are sets of single-cycle digital waveforms, arranged in a specific order. The wavetable's "position" determines which waveform is played. Moving the position with an envelope, LFO, or other modulation source creates subtle or dramatic changes in timbre. Some wavetable systems switch abruptly from one waveform to another; others crossfade smoothly between them. The modwave can do either one.

Modifiers
Use over 30 Modifiers to alter the character of any wavetable at load time. For instance, isolate the odd or even harmonics, add weight through anti-aliased quantization or saturation, or revisit the gritty character of old-school wavetable synths with the Vintage 8 & 12 options.

Morph
The 13 Morph Types let you stretch, squeeze, reflect, and otherwise alter the wavetables in real-time, changing their timbre and-when modulated-creating additional motion in the sound. Sync creates classic swept-sync timbres, using only a single oscillator. Three special Morph Types-FM, AM, and Ring Mod-modulate Osc 2 with Osc 1, and the last two even apply to samples.

A/B Blend
Using the unique A/B mode, oscillators can blend any two wavetables with phase-synchronous precision-different from simply layering voices-opening up a dimension of intermediate waveforms. Add body to otherwise "thin" waveforms, for instance, or a touch of sizzle to a mellow timbre. Even fade between two different "modifier" versions of the same wavetable. A/B Blend can be modulated in real-time, of course.

Gigabytes of samples
Wavetables also sound great when layered with samples, and the modwave oscillators handle that with aplomb, using KORG's proprietary anti-aliasing sample playback technology. Totaling in the gigabytes, the modwave's sample library includes new material from KORG, Airwave, and Francis Preve, plus a bank from Plugin Guru and a selection from the Kronos and Krome libraries.

User Sample Banks let you add more Multisamples to the system. You can create your own Banks, or use Banks from third party sound developers. modwave native can load many User Sample Banks simultaneously. This is one area in which software has the edge, due to the large amount of storage and RAM available on your computer: the hardware modwave can load only one User Sample Bank at a time.